Bunkering is one such process on the ship which has been the reason for several accidents in the past. Bunkering on a ship can be of fuel oil, sludge, diesel oil, cargo etc. Bunkering of fuel or diesel oil requires utmost care and alertness to prevent any kind of fire accident or oil spill.

In this article we will learn about the bunkering procedure on a ship and what are the important points that are to be taken into consideration while bunkering.

What Does The Word “Bunker” Mean?

The word “Bunker” is used extensively in defense forces and is used to define an area to store and safeguard personnel and supplies (such as fuel, ammunition, food etc.). It was derived from a Scottish word “Bunk” which means a reserved seat or bench.

In the shipping industry, the word bunker is used for fuel and lube oils, which are stored on a ship and used for machinery operation only. If a vessel is carrying marine fuel or lube oil to discharge it to another port, it will not be called “bunker”. If the vessel or truck is carrying it to transfer to another ship for using in its machinery, it will be termed as “bunker” and the operation performed to transport the oil is known as “bunkering”. 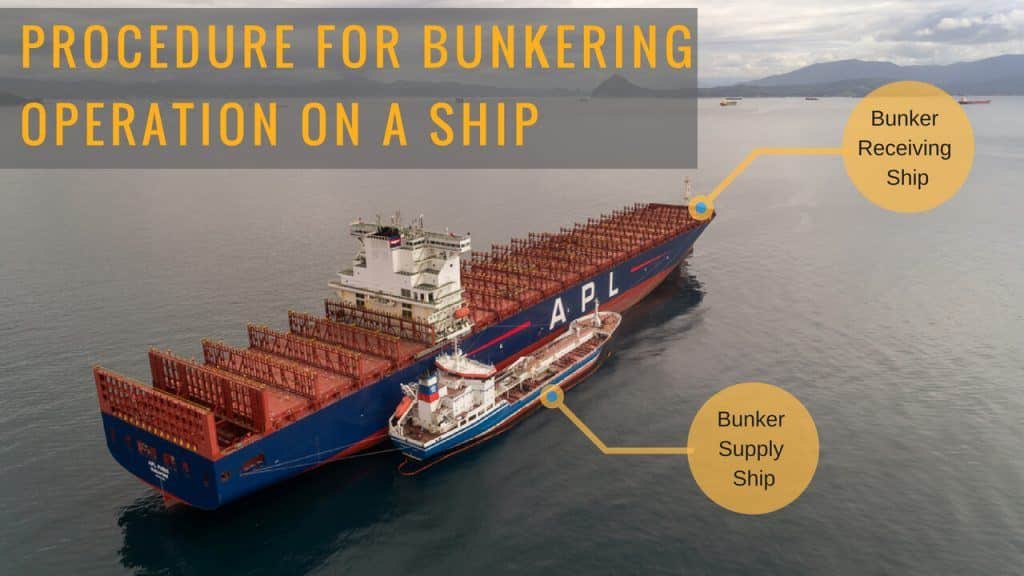 Hence, bunker fuel or bunker oil on a vessel are marine fuel/ lube oils which are carried on separate storage tanks, popularly known as bunker tanks for consumption in ship’s machinery.

Related Read:  Practical Tips For Bunkering and Storage of Fuel Oil On Ships

When the ship receives any kind of oil for using it in its machinery it is called a bunker fuel or bunker oil. Following are different types of bunkers which are supplied to a commercial or passenger vessel:

The bunker fuel can be supplied to a cargo ship in different ways. The mode or method may vary depending upon the grade or type of fuel being delivered to the vessel. There can be different types of bunkering facilities which supply the required marine fuel or lube oil to the ship. A small barge or ship carrying bunker fuel can be used to transfer marine fuel oil (such as heavy fuel oil) to the vessel. If the quantity of oil is less (e.g. lube oil or MGO, LNG etc.), it can be supplied to the vessel using trucks.

The bunkering operation procedure on a ship can be divided into three important stages:

1.The chief engineer should calculate and check which bunker oil tanks are to be filled after he/she receives confirmation from the shore office about the amount of fuel to be accepted.

2. It might be required to empty some tanks and transfer the oil from one tank to other. This is required to prevent mixing of two oils and prevent incompatibility between the previous oil and the new oil.

3. The sounding of other fuel storage tank (not be used in bunkering operation) should also be taken to keep a record of fuel already present onboard. This will help the ship’s officer in case any valve is leaking, and the bunker oil is being transferred to the unwanted tank.

Related Read: Sounding and Different Methods of Taking Sounding on a Ship

4. A meeting should be held between the members that will take part in the bunkering process, and they should be explained about the following:-

5. Sounding is taken before bunkering and record is made

6. A checklist is to be filled so that nothing is missed

7. All deck scuppers and save all trays are plugged

9. Adequate lighting at the bunker and sounding position are to be provided

10. No smoking notice should be positioned near the bunkering station

12. Red flag/light is presented on the masthead

13. Opposite side bunker manifold valves are closed and appropriately blanked

14. Vessel draught and trim is recorded before bunkering

15. All equipment in SOPEP(shipboard oil pollution emergency plan) locker are checked and kept near the bunkering station

16. When bunker ship or barge is secured to the ship side, the person in charge on the barge is also explained about the bunker plan

17. Bunker supplier’s paperwork is checked for the oil’s grade and the density if they are as per the specification

18. The pumping rate of the bunker fuel is agreed with the bunker barge/ bunker truck

Related Read:  What is Cappuccino Bunker Effect On Ships?

19. The hose is then connected to the manifold. The condition of the hose must be checked properly by the ship staff and if it is not satisfactory, same to be notified to the chief engineer

20. Most of the bunker supplier send there crew to connect the bunker oil pipeline coming from bunker ship/ barge. The ship staff must recheck the flange connection to eliminate the doubt of any leakage 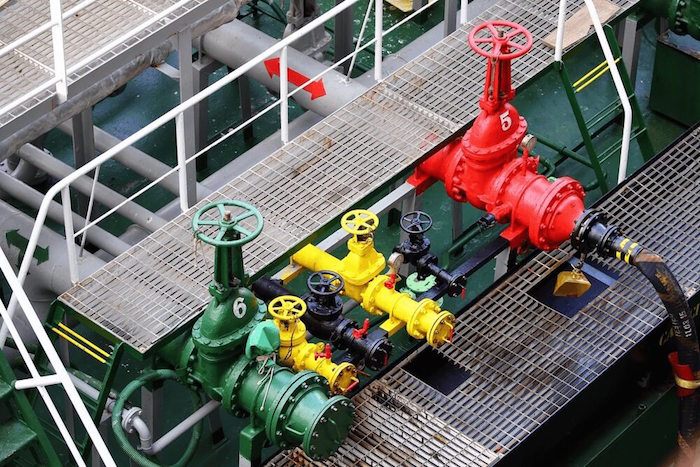 21. Once the connection is made, the chief engineer will ensure all the line valves which will lead the bunker fuel to the selected bunker tanks are open, keeping the main manifold valve shut

22. Proper communication between the barge and the ship is to be established

Realted Read: What is Ship-Shore Interface Management in the Shipping World?

23. Sign and signals are to be followed as discussed in case of communication during an emergency

25. Once all the checks are done, the manifold valve is open for bunkering

1. During the start of the bunker, the pumping rate is kept low; this is done to check that the oil is coming to the tank to which the valve is opened

2. The ship staff must track the sounding of selected bunkering tank and other tanks which are not involved in the operation to ensure oil is only going to the selected tank

3. After confirming the oil is coming to the proper tank, the pumping rate is increased as agreed before

4. Generally, only one tank filling is preferred because gauging of more than one tank at a time increases the chances of overflow

5. The max allowable to which tank is filled is 90 %, and when the tank level reaches about to maximum level, the barge is told to pump at low pumping rate to top up the tank, and then the valve of other tank is opened

6. During bunkering, sounding is taken regularly and the frequency of sounding is more when the tank is near to full. Many vessels have tank gauges which show tank level in control room, but this is only to be relied upon if the system is working correctly.

Related Read: How and Why to Take Manual Sounding On Ship?

7. The temperature of the bunker oil is also to be checked; generally, the barge or supplier will provide the bunker temperature. Temperature is a critical parameter, especially for bunker fuel such as heavy fuel oil, and any deviation in the provided temperature value may lead to a shortfall in bunker supply

8. A continuous sample is taken during bunkering with the help of sampling cock at the manifold

9. The crew needs to switch (open and close the valves) the internal storage tanks to accommodate the quantity of the bunker oil being supplied. Utmost precaution needs to be taken when opening the other storage tank valve and closing the valve of the tank which is reaching the maximum fill limit.

1. Once the bunker is finished, it is a general practice to air blow the bunkering supply line for discharging all the oil trapped in the pipelines. At this stage, ensure all sounding pipe caps are closed and keep a watch on those storage tank vents which are at its maximum limit.

2. Avoid opening the bunkering supply line connecting between bunker ship and receiving manifold. In case of any discrepancy, the supplier may agree to compensate the shortfall and may resume bunkering operation

Related Read: 13 Malpractices In Bunkering Operations Seafarers Should Be Aware Of

3. Draught and trim of the ship is checked

4. Take sounding of all the tanks bunkered

5. The volume bunkered should be corrected for trim, heel and temperature correction

6. In general, for each degree of increase in temperature the density should be reduced by 0.64 kg/m3.

7. Four samples are taken during bunkering. One is kept onboard, one for the bunker ship or barge, one for analysis, one for port state or IMO

8. The chief engineer will sign the bunker receipt (BDN) and the amount of bunker received

9. If there is any shortfall of bunker received the chief engineer can issue a note of protest against the barge/supplier (in case the deficit is not agreed by the bunker supplier)

10. After everything is settled, the hose connection is removed

11. The sample is sent for laboratory analysis

12. The chief engineer will make the entry of the operation in oil record book along with received BDN

12. The new bunker should not be used until the report from the lab

Do you think any point needs to be added to this procedure?

Let’s know in the comments below.

Disclaimer: The authors’ views expressed in this article do not necessarily reflect the views of Marine Insight. Data and charts, if used, in the article have been sourced from available information and have not been authenticated by any statutory authority. The author and Marine Insight do not claim it to be accurate nor accept any responsibility for the same. The views constitute only the opinions and do not constitute any guidelines or recommendation on any course of action to be followed by the reader.

The article or images cannot be reproduced, copied, shared or used in any form without the permission of the author and Marine Insight.